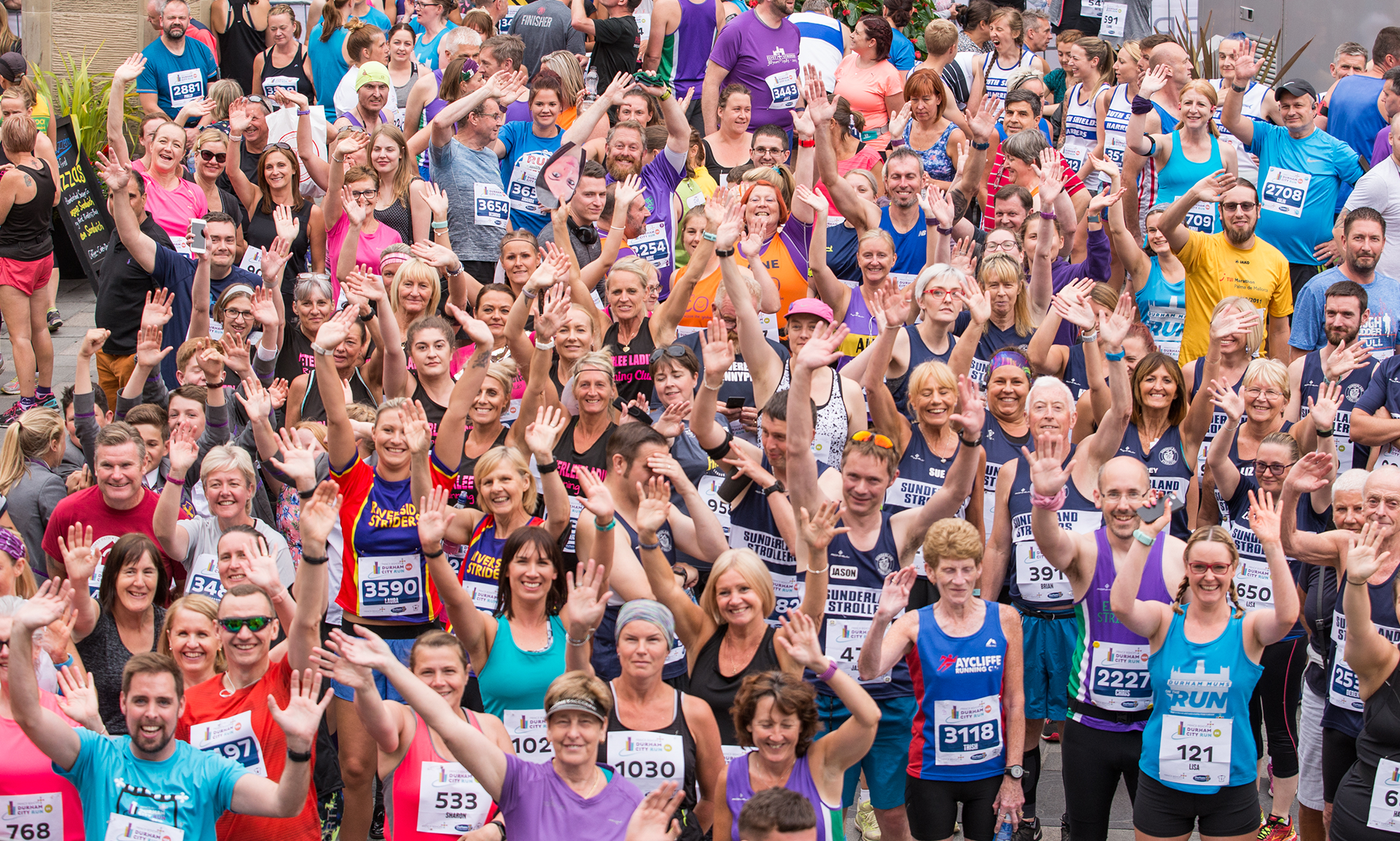 A record field of runners was cheered on by big crowds at the 2018 Prince Bishops Durham City Run on Wednesday evening. Over 3,000 people signed up to tackle either the 5K or 10K race, 500 more than in 2017.  On a warm summer evening, runners crossed the finishing line on Palace Green, in front of Durham Cathedral and Castle.

The event was organised by Events of the North, supported by Durham County Council, and with Prince Bishops Shopping Centre as headline sponsor.  After last year’s 10K and 5K races both sold out, the event team worked with Durham County Council to explore ways in which the event could be expanded. For 2018, the 10K and 5K races had different start locations and times, with runners in the longer run setting off from Millennium Square for the first time.  The new arrangements reduced congestion for runners and limited road closures in the city, and allowed organisers to increase the size of the fields in both races.

The 10K and 5K were preceded by the Best Bar None Services Hill Sprint Relay, which saw teams from the emergency services race each other from Millennium Square to Palace Green.  This year, a team from the police service won the race.

The Prince Bishops Durham City 5K and 10K races were started by 11-year-old Lewis Littlewood, after he won a competition organised by Prince Bishops Shopping Centre.  Lewis is from a family of very keen runners but was too young to enter either of the races, unlike his mum Wendy and dad Michael who both ran the 10K.  Winning the competition gave Lewis the opportunity to get involved on the night and he plans to be on the start line of the 5K next year.

The Prince Bishops Durham City 10K and 5K attracted runners of all ages and ability from throughout the region, including fast club athletes, C25K (couch to 5K) runners and many who took part to raise money for good causes.  Official charity partner the If U Care Share Foundation fielded a big team of runners including North East X Factor star Joe McElderry, who completed the 10K.  Also on the 10K start line was anti-bullying campaigner and charity fundraiser Ben Smith, who ran 401 marathons in 401 days, and continues to promote the life-changing potential of running.

Graham Rush of Cheltenham and County Harriers won the Prince Bishops Durham City 5K in a time of 15:27.Carl Smith of Tyne Bridge Harriers was second in 15:59 and Liam Taylor was third in 16:19.  First lady was junior runner Emily Chong of Chester-Le-Street & District AC in 19:45, winning the race for the second time in three years.  Katie Francis of Birtley AC, another junior runner, was second in 20:06 and Shona Haston of Teesdale AC was third in 21:19.

The winner of the 2018 Prince Bishops Durham City Run 10K was Stephen Jackson of Elvet Striders in 33 minutes and 36 seconds, retaining the title he claimed last year.  Joe Johnston of Rossendale Harriers was second (34:42) and Will Hogg was third (35:52).  Also retaining her title was Tracy Millmore of Birtley AC who won the ladies’ race in 38:33, with Lyndsey Fraser of Edinburgh Athletics Club in second (41:20) and Alice Smith of Sunderland Harriers third (41:30).

“The weather was great, the atmosphere fantastic, and there were some excellent performances on a challenging course.  All in all, it was a brilliant evening in a stunning location.  We’re grateful to all of our sponsors and volunteers who have offered such strong support.  This year’s event was the best yet and the vision and commitment of Durham County Council helped us to make the changes that allowed both races to grow.  That has worked really well and I think that the Prince Bishops Durham City Run has an exciting future.”

Cllr Ossie Johnson, Durham County Council’s cabinet member for tourism, culture and leisure, said: “We are delighted to have once again been able to support the Prince Bishops Durham City Run.  This event is not only a great way to keep fit but also an opportunity for people to see what a beautiful city Durham is and everything it has to offer.  It was fantastic to see a record number of runners taking part and we look forward to welcoming them all back to Durham in the future.”

“Many congratulations to Lewis for winning the competition to start both of this year’s races.  We are delighted to welcome the Durham City Run back to the city for its third year and it is excellent to see such an impressive turnout from so many dedicated individuals – you are all amazing.  This is a fantastic occasion for Durham City and we are proud to be associated with such a great event.”