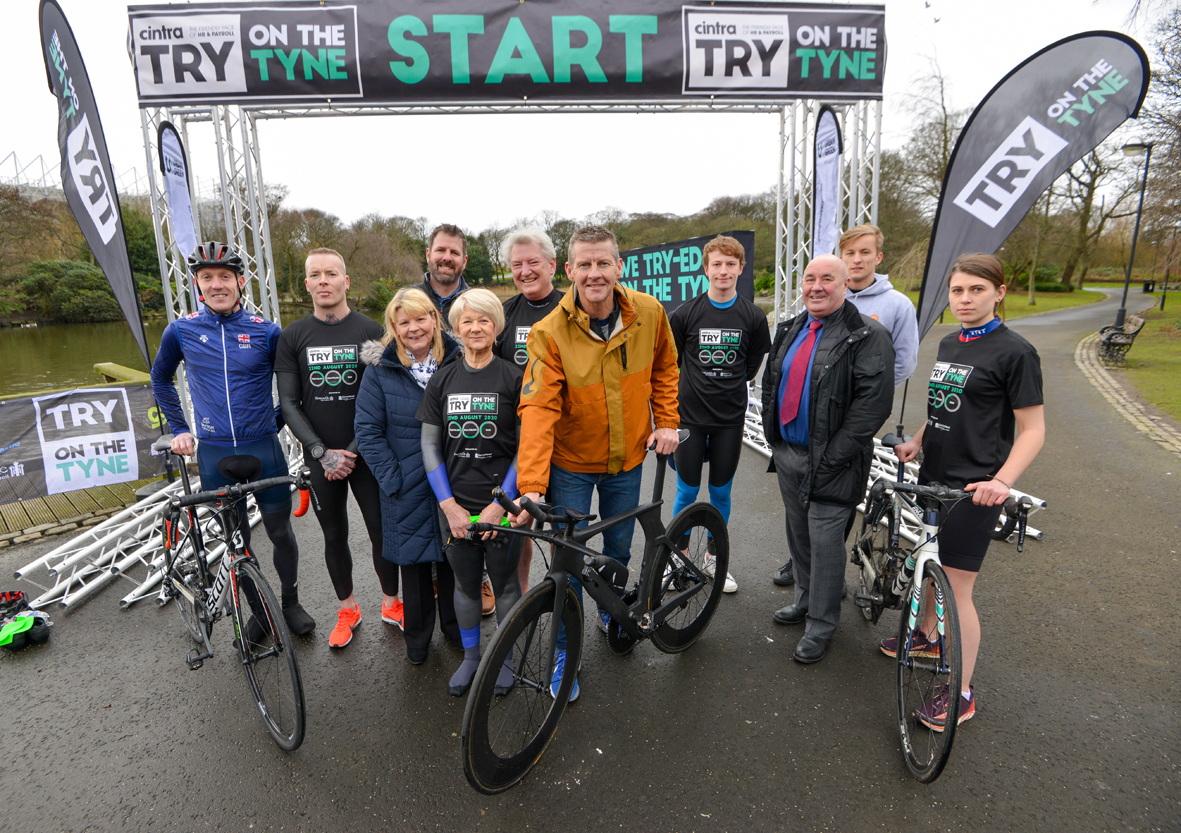 The sport of triathlon will come to Tyneside in August, as part of a two-day festival of multi-sport events. Following its successful debut last year, Cintra TRY on the Tyne will return to Newcastle and Gateshead in 2020 with 5k and 10k runs, duathlons, a family athletics event, and for the first time, the addition of two triathlons in the heart of the city. Sponsored by North East firm Cintra HR and Payroll Services, TRY on the Tyne will be held on 22 and 23 August and is being organised by Steve Cram’s company Events of the North, in partnership with Newcastle City Council and Gateshead Council.

TRY on the Tyne was launched in 2019, offering city centre based mass participation multi-sport races during the summer. This year, the event is being expanded with the addition of ‘super sprint’ and ‘sprint’ triathlons on Saturday 22 August. A super sprint triathlon involves a 400m swim, followed by a 10k bike section and then a 3k run, while the distances in a sprint triathlon are 750m, 20k and 5k.

Thanks to the support of Urban Green Newcastle, the swims will be taking place in Leazes Park Lake. Competitors will then complete a bike section on closed roads in the city, before completing their triathlon on the quayside with a run along the banks of the Tyne. This week, organisers, event partners and event ambassadors met up with members of Newcastle University Triathlon Club to test out the course of the swim leg and the transition zone in Leazes Park.

Alongside the triathlons on 22 August, the TRY on the Tyne sprint duathlon (5k run, 20k bike and 3k run) will return, as well as 5k and 10k runs, a junior duathlon and a junior run, with all races except the triathlons having a mass start at Baltic Square in Gateshead and finishing on the Newcastle Quayside. Last year’s events attracted both experienced and novice runners and duathletes to a flat and fast course. Many of the participants are expected to use the events to raise money for good causes, including TRY on the Tyne’s official charity partner, Newcastle based international children’s charity COCO (Comrades of Children Overseas).

On 23 August, TRY on the Tyne will bring Paula’s Families on Track concept to Newcastle’s Leazes Park. The brainchild of Paula Radcliffe, Paula’s Families on Track is powered by Atom Bank and will give family teams (of between three and five members) the opportunity to work together to complete 10K in a continuous relay in laps of either 1,000m, 500m or 250m, all on a safe, enclosed course. Full details of the event on 23 August will be released soon.

Race founder Steve Cram comments: “We stated last year that our longer term aim was to add a triathlon to the TRY on the Tyne programme, so I am delighted that we can do that. Using Leazes Park Lake allows us to show off even more of the iconic landmarks on Tyneside and we’ve created a really attractive city centre route that’s going to be great for participants and spectators alike. The shorter triathlon distances lend themselves to exciting races and should appeal to experienced athletes and beginners alike.”

Councillor Angela Douglas, Gateshead Council’s Cabinet Member for Culture, Sport and Leisure, comments: “We’re delighted to see the return of TRY on the Tyne this year and look forward to welcoming even more competitors to Gateshead. With the addition of two new triathlons the event is set to be even bigger for 2020.

“This is a fantastic opportunity for participants to take in some of Gateshead’s most iconic sights, including Gateshead Millennium Bridge, as they race along the banks of the Tyne. Events such as these are a great way of getting more people excited about sport and I’d encourage everyone to get behind the event, whether they are taking part or spectating, and show their support over the two days.”

Cllr Ged Bell, Newcastle City Council cabinet member for Employment and Culture, adds: “It shows the ambition we hold that so much hard work has gone on to build on the huge success of last year’s TRY on the Tyne to open up even more of our great city to what will be a fantastic event this summer. Leazes Park is one of the real gems of Newcastle and it’s the perfect place to host the first ever swimming leg of a Tyneside triathlon.

“Try on the Tyne is looking incredibly exciting and it’s a great opportunity for people to enjoy one of the amazing parks in our city while getting active alongside thousands of others. Few places know how to put on an event like we do and you can be sure this isn’t one to be missed.”

James Cross, CEO of Urban Green Newcastle, adds: “Leazes Park was Newcastle’s first purpose-built public park, so it’s very fitting that the city’s first ever triathlon will visit Leazes Park Lake this summer. We want our parks to be places where people can pursue their passions and really connect with nature. Events like TRY on the Tyne are a great way for people to experience our open spaces and spend time enjoying the great outdoors.”

Carsten Staehr, CEO of Cintra HR & Payroll Services, adds: “Cintra is delighted to support TRY on the Tyne – it’s a fantastic initiative which really puts the North East on the map. We mentioned the event at our recent annual client conference and it generated such a buzz. We were thrilled that so many of our clients were interested in taking part.

“It’s set to be a great event – the flexible entry options ensure that it’s inclusive and fun for all, but also a great opportunity for seasoned triathlon competitors. It’s certainly brought out our competitive spirit and Cintra will be putting together a team to TRY on the Tyne. We’re so proud to be a part of this event!”

Lucy Kendall, CEO of COCO, comments: “COCO is delighted to be the official charity partner of Cintra TRY on the Tyne. Participation in sports events has always been an important aspect of our fundraising activities, so it’s really exciting to be involved in something new that’s on the doorstep for so many of our supporters.

“This is a very special year for COCO, as we celebrate our 20th anniversary. We are determined to use events like TRY on the Tyne to boost our efforts and give even more young people in marginalised communities in East Africa the best possible start in life. If anyone would like to tackle one of the races at the event to raise money for COCO, we’d love to hear from them.”

Places on the TRY on the Tyne sprint triathlon cost £50 for affiliated athletes and £54 for unaffiliated athletes, and the prices for the super sprint event are £45 and £49. The sprint duathlon costs £36/£40, while the junior duathlon price is £12. Places on the 10k and 5k cost £23/£25 and £13/£15 respectively, and the junior 2k is £8 to enter. A family team can enter Paula’s Families on Track for £40. Entries for TRY on the Tyne are now open at www.tryonthetyne.com.